Arend Koekkoek, CEO
In 2017, four entrepreneurs in the Netherlands began working on their ideal farm—technologydriven and non-reliant on chemical pesticides. Their goal was to establish locally-sustainable agricultural supply chains, where people could eat safe and healthy food every day without depending on imported produce. To achieve this, they built and tested several agricultural robots, continuously improving upon them until they developed the current version; Robot One.

Robot One is a solar-powered multifunctional agricultural robot for large scale biodiverse environments. It can automate a broad range of agricultural tasks, facilitating greater accuracy, speed, and cost-effectiveness. It can be configured easily to nurture more than 40 types of crops, including green beans, carrots, beets and lupine. In the future, Robot One will also be able to seed and harvest these crops.

Robot One has integrated solar panels, which can generate sufficient energy for the system to function seamlessly without the need for refueling or recharging

Robot One’s extensive learning environment makes it versatile for managing most agricultural tasks with minimum to zero human intervention. Satisfied by the capabilities of Robot One, the four entrepreneurs decided to make the technology available to the broader farming community and laid the foundation for Pixelfarming Robotics.
What makes Pixelfarming Robotics the torchbearer for sustainable farming is Robot One’s non-dependence on fossil fuels or the electric grid.

“Robot One has integrated solar panels, which can generate sufficient energy for the system to function seamlessly without the need for refueling or recharging,” says Arend Koekkoek, CEO of Pixelfarming Robotics. This is in stark contrast to most of today’s off-the-shelf and retrofit automation solutions, which consume hundreds of liters of diesel or substantial grid electricity.

Pixelfarming’s Robot One is further differentiated by its computer vision functionality, which enables the robotic system to continually analyse the plants in real-time through 3D cameras and perform specific tasks relevant to the vegetation categories. This ability to recognise plants also helps farmers to completely maintain their crops without the use of chemicals.

Data is gold, and Pixelfarming Robotics values that. It ensures that all crucial agricultural insights gathered from its robots are stored in one place, Pixelfarming Academy, where users can access the information to plan their future agrarian operations. For instance, by contrasting the performance of crops against weather, they can adjust the rotation of specific crops to maximise yield. The continuously-updated data of Pixelfarming Academy can also be used by farmers to program new functionalities into their Robot One units.

Bolstered by the competencies of Robot One, Pixelfarming Robotics is now working on a new range of robotics products. The company is already planning the launch of Pixie, a versatile supply robot, which will support Robot One by carrying the relevant produce or raw material during farming. Whether it is supplying seedlings or retrieving the harvested crop from Robot One, Pixie will cut down manual labor and bring greater efficiency into the fields.

Pixelfarming Robotics is an ecological way of farming that is encouraging an increasing number of players in the industry to adopt its unique approach and achieve unparalleled yield optimisation. The positive steps taken by Pixelfarming Robotics will certainly pave the way for future-sighted companies in revamping the functionalities of their smart farming systems and making their contribution to safe and locally sustainable supply chains. 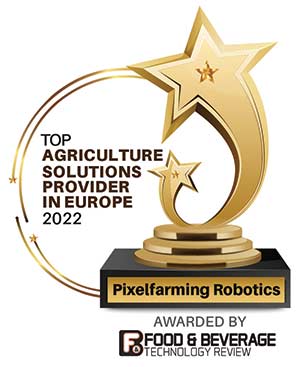 Description
Pixelfarming Robotics develops and distributes Robot One, a solar-powered agricultural robot that can automate a broad range of agricultural tasks. 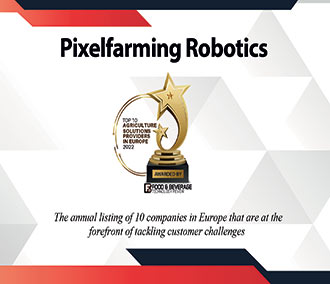 "Robot One has integrated solar panels, which can generate sufficient energy for the system to function seamlessly without the need for refueling or recharging"