Rusty Rodriguez, CEO
It is often nostalgic to think of farms as ‘vast stretches of tranquil greenery’ in today’s unpredictable world. Be it temperature extremes (both high and low), salinity, drought, soil compaction, or other implications of climate change, the stress that crops face is a fundamental challenge for farmers in the current uncontrolled environment. As a result, climate stress translates to reduced yields and low-quality crops. It’s safe to say that farming is persistently affected by these swirling forces of change. However, there are numerous plants thriving by themselves in harsh habitats; symbiosis makes it possible. Plants form mutually benefiting relationships with endophytes (microbes like bacteria and fungi that dwell within the plants). In turn, the endophytes confer stress tolerance to plants, allowing them to survive and thrive in difficult environments. By harnessing mother nature’s knowhow—symbiosis—Adaptive Symbiotic Technologies is dedicated to improving agricultural sustainability and farmers' profitability with its novel technologies that mitigate the impact of climate variability. The company focuses on the research and production of symbiotic plant microbes as agricultural crop treatments for farmers. “There are three basic ingredients in agriculture—seeds, chemicals, and the biologicals. We work in the biological arena (specifically, microbiological space) to empower farmers, seed companies, and distributors to take agriculture to the next level and increase productivity in agriculture,” says Rusty Rodriguez, CEO of Adaptive Symbiotic Technologies.

Backed by an inventive, hard-working group of scientists, business minds, growers, and more, Adaptive Symbiotic Technologies is committed to creating an impact in agriculture with innovation. The company has commercialized a diverse range of biological products, including BioEnsure® (fungal inoculant) and BioTango™ (bacterial inoculant powder), to confer positive symbiotic benefits to a diverse line of crops. Through years of continual research, Adaptive Symbiotic Technologies understands the role of fungal endophytes in plant biogeography and adaptation and intends to deliver its technology to farmers, both small and large-scale.

“We've been field testing our products around the globe, mainly throughout the U.S., Australia, South America, and India for quite some time. We commercialized our first product, BioEnsure, in 2017, followed by our second product in 2019,” notes Rodriguez.

BioEnsure is a liquid agricultural treatment that consists of multiple strains of powerful symbiotic fungi that enter the plant, communicate with it throughout the growing season, and provide outstanding protection from extreme ecological conditions. The product confers varied stress tolerances to crops, thereby allowing for increased crop yield and quality, improved seed germination, and enhanced nutrient use efficiency. On the other hand, BioTango is designed to either produce nutrients or extract nutrients from the soil and provide them to plants and synergize with the nutrient use efficiency provided by BioEnsure. These products can be applied to the seeds before they are sown or bagged by the seed companies. At the time of planting, farmers can mix them with water/starter fertilizer and apply them in furrow by dribbling onto the seeds. They can also be applied to plants during the growing season as a foliar spray. When the products are applied as a foliar spray anytime between the emergence of the plant from the soil and its reproductive phase, they increase the vigor of plants, thereby significantly improving yields irrespective of the crop.

To further expound the capabilities of their products, Rodriguez recalls their engagement with one of the seed companies that started using their products on all their seeds. The seed company sprayed the products on the stressed corn and soybean crops late in the season during a drought phase. As a result, the plants suffering from high temperatures, low soil moisture recovered from drought stress. With this, the seed company could ensure a 25 to 30 percent increase in the yield with a single spray of the products. Additionally, with the help of the bacterial and fungi inoculants, the farmers could confer unmatched cold tolerance to the crops even when they had planted them below the optimum temperature.

Consistent quality control is one of the biggest challenges in the agricultural biologicals realm. To this end, Adaptive Symbiotic Technologies has built its own highly effective and efficient production system. “When we ship a product from our facility, we know exactly what's in it, what the viability of the organisms is, and the effectiveness of it,” remarks Rodriguez. “We are a science-driven R&D and manufacturing company. What makes us unique is that we carry out all of the manufacturing by ourselves to ensure utmost quality. No other products on the market can bring the level of climate resilience to crops that ours do.”

Adaptive Symbiotic Technologies strives to help farmers achieve 200 percent ROI. On testing about 35 varieties of crop species throughout the U.S., the company takes pride in the fact that its products have worked successfully on all of them, regardless of soil type and climate zone.

While Adaptive Symbiotic Technologies has recently released a new product for home gardeners, it has more products (various powder formulations) in its pipeline that can be transported to other countries without hassle. Treading ahead with an undivided focus on transforming agriculture, the company is doubling its capacity to innovate and develop different microbial blends for conferring different levels of extreme stress tolerance to crops. 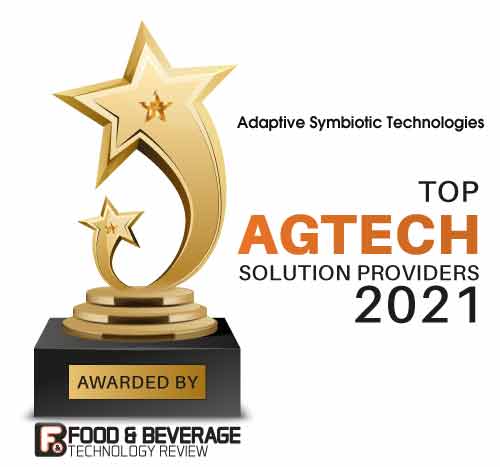 Description
By harnessing mother nature’s knowhow—symbiosis—Adaptive Symbiotic Technologies is dedicated to improving agricultural sustainability and farmers' profitability with its novel technologies that mitigate the impact of climate variability. The company focuses on the research and production of symbiotic plant microbes as agricultural crop treatments for farmers. Backed by an inventive, hard-working group of scientists, business minds, growers, and more, Adaptive Symbiotic Technologies is committed to creating an impact in agriculture with innovation. The company has commercialized a diverse range of biological products, including BioEnsure® (fungal inoculant) and BioTango™ (bacterial inoculant powder), to confer positive symbiotic benefits to a diverse line of crops 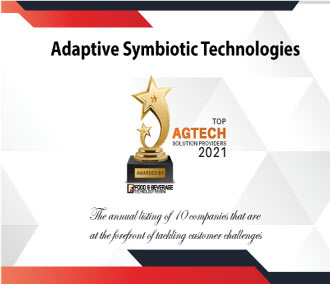 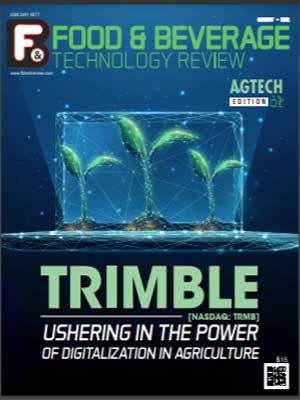